Happy feedback on a cover 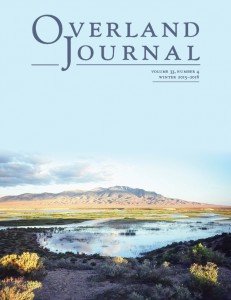 From the editor of Overland Journal, on the winter 2015 issue:

The cover is totally stunning!

Here’s the caption on the image: Star Peak, at 9,863 feet, is the highest peak in the Humboldt Range in Pershing County, north-central Nevada. This view looks south toward the peak from the junction of the Applegate Trail and the Humboldt River Route. The water in the photo is Rye Patch Reservoir, fed by the Humboldt. The Applegate Trail goes through the northern part of the reservoir, constructed in the 1930s, where the trail separates from the Humboldt route. Photograph by Herman Zittel.

Junípero Serra: California, Indians, and the Transformation of a Missionary (in the series Before Gold: California Under Spain and Mexico) has been selected in Choice Reviews Online Top 25 Academic Books of 2015! The book has gotten a lot of press this year, as it played a pivotal role in the canonization of Serra by Pope Francis last year. In fact, the authors, Rose Marie Beebe and Robert Senkewicz (two frequent collaborators), were flown to the Vatican and the book was added to the archives there!

I am the designer on this series and this volume is a beauty: 7×10 with lots of color images. 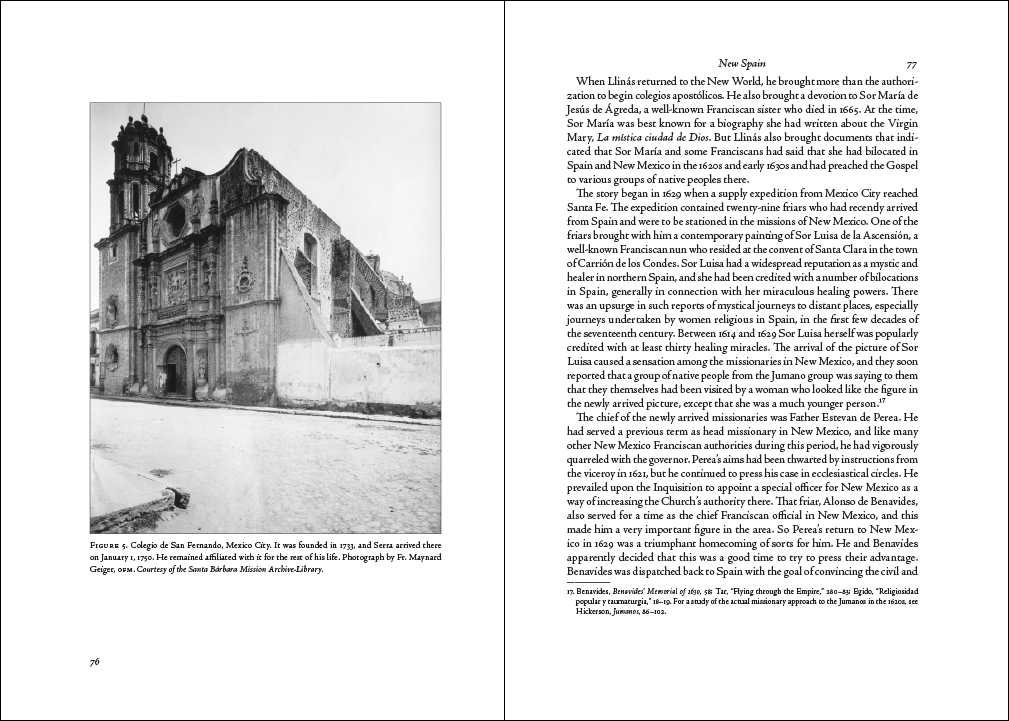 Here are some pages from a book in the same series, Californio Portraits: Baja California’s Vanishing Culture, by Harry W. Crosby. The photos in this book were taken in the late 1960s, and we decided to encourage that feel by leaving the images without a keyline and with the curved corners and rough film edges. 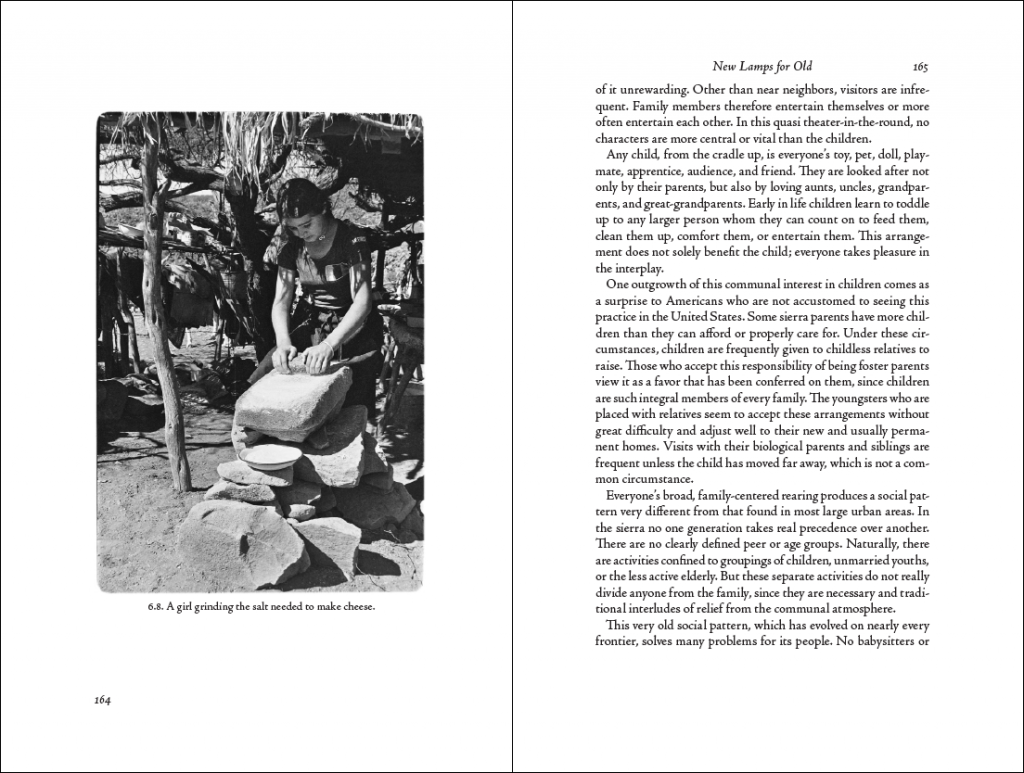 At the Western History Association conference in Portland in October, I met up with Rose Marie and Bob and learned about their upcoming volume on Vallejo. It will be  a very special addition to the series—not surprising given the ambitious authors, who are driven to do the very best!

The end of another year 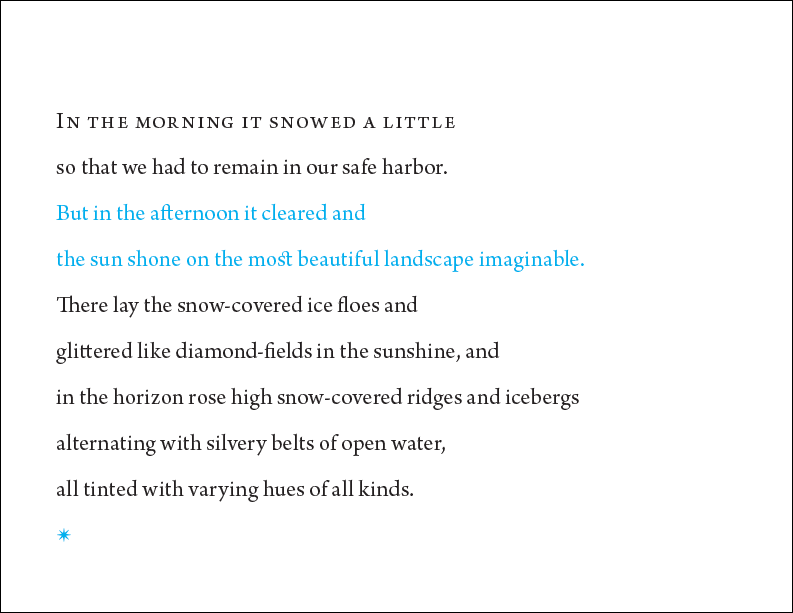 The lovely quote for this year’s Christmas card, like last year’s, came from a current project (having copyedited it over the summer and being partway through the design process): The Greatest Show in the Arctic: The American Exploration of Franz Josef Land, 1898–1905, by P. J. Capelotti. The vivid description—a good reminder of the beauty of winter—came from an explorer who was endeavoring to be the first to reach the North Pole, an icy wonderland if there ever was one.

Following up my last post is another collaboration with Robert Senkewicz and Rose Marie Beebe, a very short book for the Santa Barbara Mission Archive-Library. We’ve done a few of these booklets, all 7×10 and in full, glorious color. 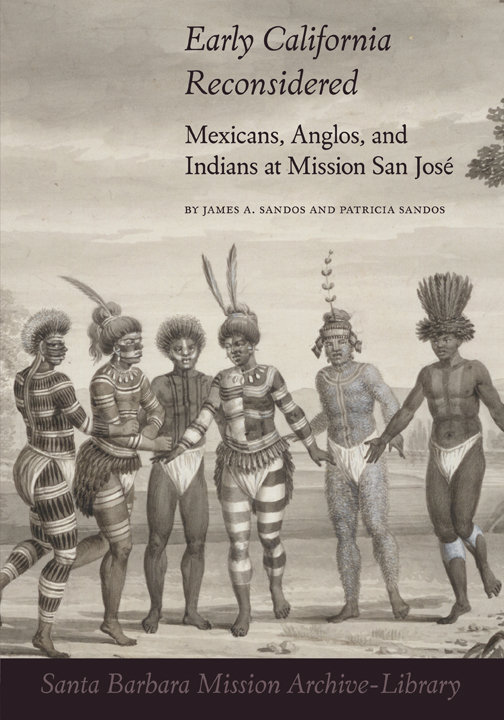 A nice note came from the head of the SBMAL, too! I saw Rose Marie and Bob at the Western History Association conference in Portland last month. They were being celebrated by the University of Oklahoma Press for their tremendous work on Junípero Serra: California, Indians, and the Transformation of a Missionary (Before Gold: California Under Spain and Mexico), which played a role in the recent canonization of Serra by Pope Francis. The book is selling really well (of course, it’s got color illustrations—these two love color in their books) and was added to the archives at the Vatican, a first for me! (I was the designer for the book. I’ll do a post of the whole Before Gold series that the Serra book is in later this year.) I also met in person for the first time Peter Blodgett, whose Motoring West inspired last year’s Christmas card! (Looks like I need to write about this series too–the design is awesome.) My workload has been very full this year, and I’ve got a growing list of projects that I’m looking forward to displaying here. Maybe in December, when (if?) things slow down!

This spring, I worked on some online magazines for my frequent collaborator Rose Marie Beebe at Santa Clara University. (See here for a previous iteration of this project.) Her Advanced Spanish Writing Workshop does a wide range of articles (on travel, food, interviews, book and movie reviews, and editorials, plus advertisements and crossword puzzles) over the course of the semester, and then I get the fun job of making it all into three 70-page magazines! It is such a joy to work in bold, vivid color, and since it’s all onscreen, resolution and length–always a concern with print design–is not an issue.

I had a terrible time editing all of my favorite pages down to a handful, so instead, here’s a big gallery. The students did a great job choosing the most striking images, so the advertisements especially came with a lot of inspiration.

I heard from many of the students. Here’s one of the messages:

Hello, I am one of the students from Santa Clara University that had the opportunity to work with Professor Beebe to write content for the Spanish magazines. I just wanted to say that the graphic design for the magazines are phenomenal; I very much love the fonts, style, placement of the pictures, colors, and just about everything that went into them. Thank you very much for your hard work in designing them. I’m sure you had as great of a time creating them as we did while writing the articles.

Have a great day!

I wish that I had taken a photo of them as they saw the pages of the magazines appear on the screen in class. They were stunned, to say the least!

The summer issue of Overland Journal is at press. Here is a little sample of the pages:

First is the table of contents for the issue–I realized that I’ve never shown what page 1 looks like! It’s a great way to show readers a peek at what is inside. 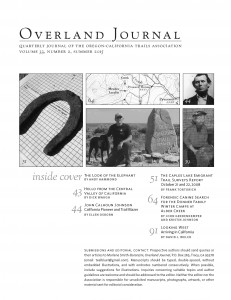 And this is Looking West, the column that closes most issues. The author always comes up with neat images that are easy to beautifully showcase. (I’ve also shown samples of Looking West here.) 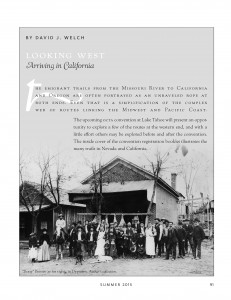 And finally, we got so many wonderful compliments on the spring issue! Here’s one from longtime OCTA member Ray Schoch that made me especially proud:

This might have been the best issue of OJ ever. The lengthy piece on training and use of oxen is the first comprehensive treatment I’ve seen – which probably means I’ve not read nearly as widely in the trail field as some of the more dedicated trail scholars would like me to. Loved that cover photo. If Dixon Ford had been in period costume, I might have had to frame this cover and put it alongside that 2007 issue that featured my own photo of Mitchell Pass through Scott’s Bluff. The front side of the card, with the cover and a short link to the book on Amazon. The back side of the card, with a brief synopsis of the plot.

I recently made up some business cards to help a recent author spread the word about his new ebook. The author was very appreciative:

WOW! And a big thank you for those great looking cards. It’s obvious you put some thought to the cards design and Rose and I are thrilled with them. . . .

The cards look great and I can’t thank you enough. Now I have a mission! Get those cards out! It’s been a really busy spring, and I’ll be writing more soon about some of the projects that have been underway. First up: the spring 2015 Overland Journal, which is currently being mailed to OCTA members. Remember, we do an extra, black and white cover on the outside of each issue to protect it from the ravages of post office processing. It’s a really fun opportunity to highlight what is in each issue. Lately we’ve been choosing wry bits of humor from an article, and this issue is no different.

I also want to share the cover of this issue, because the colors are outstanding! You can practically hear the salt flats crunching under the heavy feet of ox Ruff. We have never run an image featuring a person, but once I saw this one, any other choices disappeared as contenders. Cover of the spring 2015 Overland Journal

Here are the covers of a few ebooks on Amazon that I designed. Ebooks made for the Kindle are not what I usually do–they lose almost all of the design work and polishing that I do in a print book–but these were fun little projects anyway. I love designing covers, and these were a nice change from the historical images that I usually have to work with.

First, BlindSight by Max Shell, an FBI/terrorism novel (my first book of fiction, actually!). The author had the idea of sunglasses (worn by the blind heroine) with a cracked lens, and he also wanted some kind of black/white divide. Here is what I came up with: Next, two books by Katie Carey Louden: Autobiography of a Universe: A Cycle of Sacred Poetry and Kindling Brighid’s Fire: Recovering from Burnout. The author’s artwork is featured on both of these. I especially like the Autobiography cover; the simple, careful type compliments the colorful swirl so elegantly. 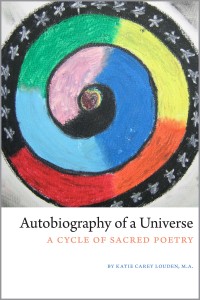 Finally, Anodynes and Nostrums: A Century of Patent Medicines for Infants and Children by Anita Britt is now available for the Kindle, too! I previously wrote about this book here. This book has a lot of color illustrations, so doing an ebook file was a good choice for it, as color printing can be cost prohibitive—but running the images in grayscale would have dulled their effect considerably. 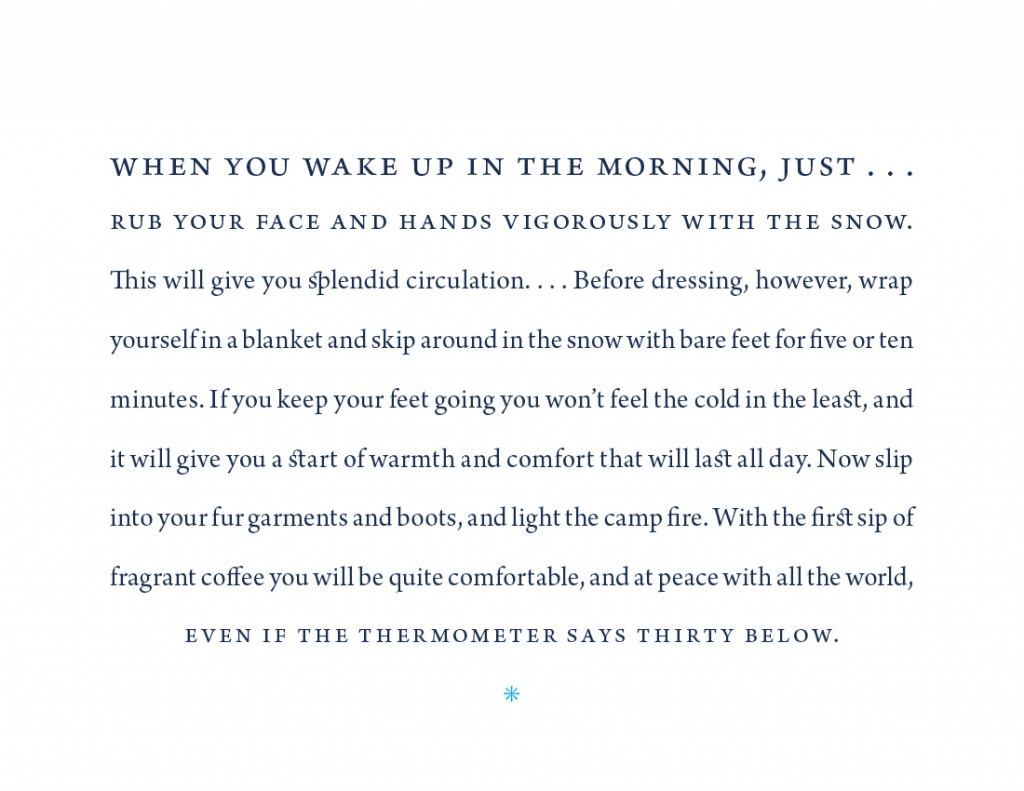 This year’s Christmas card came from a book that I worked on for much of this year: Motoring West, Volume 1: Automobile Pioneers, 1900–1909, edited by Peter J. Blodgett. The book is full of pithy quotes like this one, and I highly recommend it–look for it from the University of Oklahoma Press later this winter.