Yikes! I can’t believe it’s been so long since I last updated. Here are few things I’ve been working on.

I continue to be proud of the new design for Overland Journal—it even inspired another quarterly to take on a new look! Here is the Fall cover.

Cover of the Fall 2016 Overland Journal

This issue had an article by William P. MacKinnon, author of At Sword’s Point, Part 2: A Documentary History of the Utah War, 1858–1859. I copyedited and designed this giant (698 pages) in 2016 (I worked on part 1 in 2008), and his article was a couple of great extracts from the book: anecdotes about real life during the war.

Another article in the Fall issue was on the design medallions that mark the Oregon Trail, also shown on the cover. Besides the fact that I love the layout on this page, it’s also a good example of the contrast between color and black and white—on the cover, we show the medallion in its place in the world, but the starker black and white shows the great detail in the sculpture. 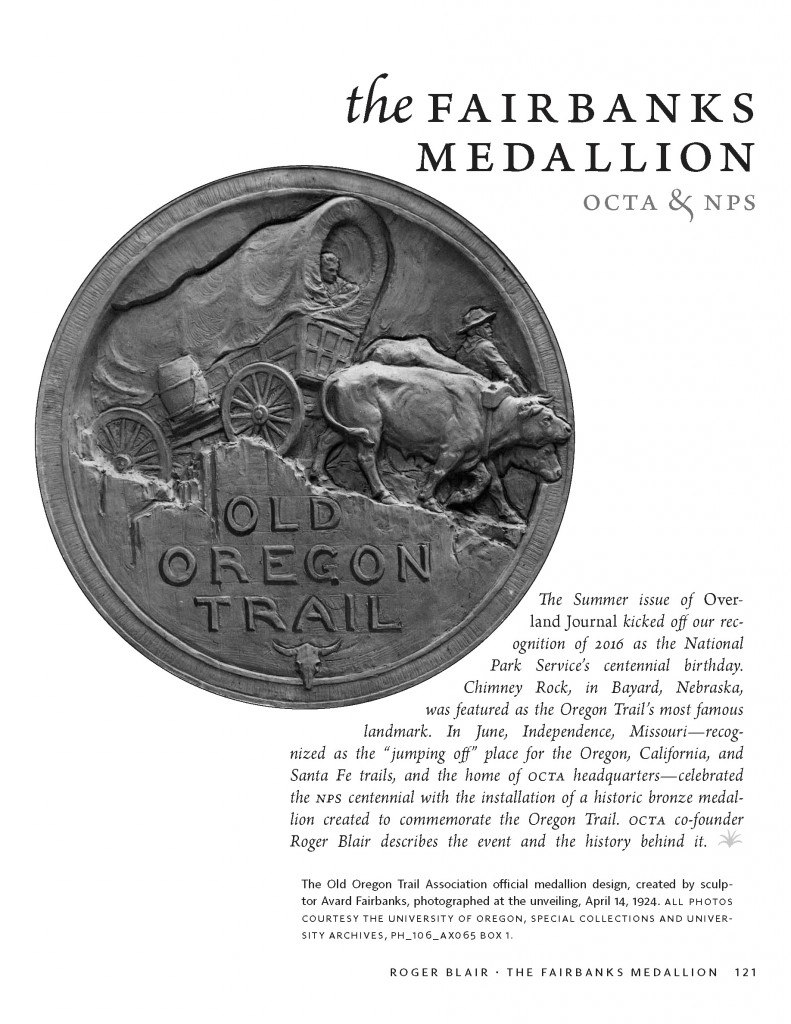 Working backward, here is the Summer cover of Overland Journal. 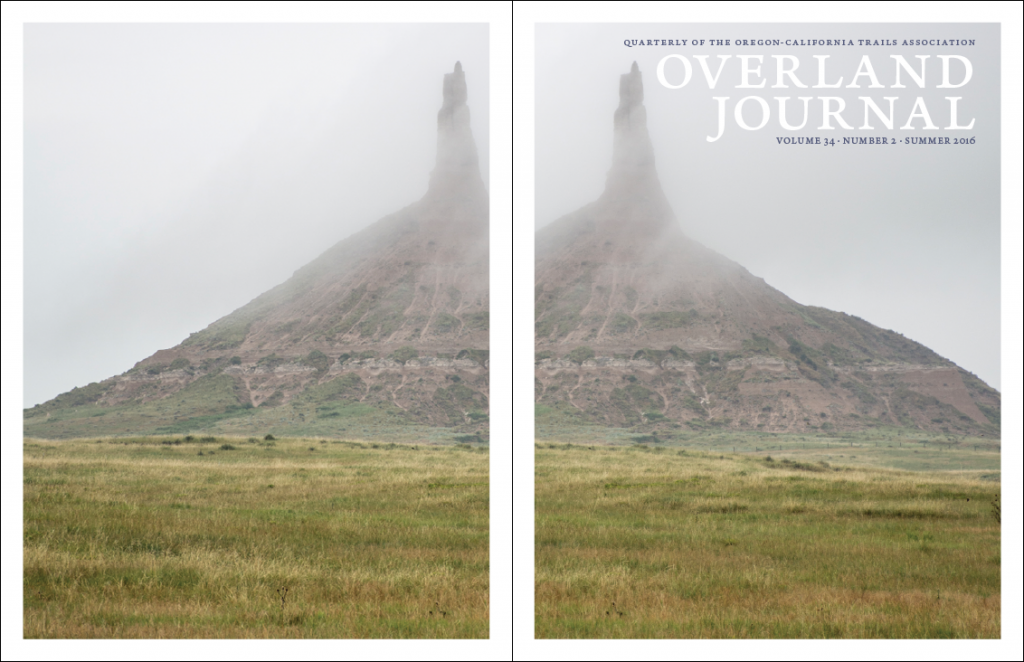 This photo of Chimney Rock was a dramatic change from the usual blue sky/green-brown ground. Running the spire of Chimney Rock off-center was an unusual choice for a symmetric subject, but I liked how it didn’t end up competing with the masthead, which we ran in white to compliment the moody sky. The photo was by Ray Schoch, and we ran a paragraph from his email as the cover caption, to set the stage for the reader:

Chimney Rock, July 21, 2015.
“I decided to depart from the most efficient route (I-80 to western Nebraska, then I-76 southwest to Denver) and followed the North Platte trail route from Ogallala to Scott’s Bluff. The day started in sunshine at Windlass Hill and Ash Hollow, but fifty miles later, clouds had rolled in and it was just starting to spritz a little rain at Courthouse and Jail Rocks. Another fifteen miles west and it was raining lightly, but steadily, at Chimney Rock.”

Another project from this past spring and summer was the design and production of The Rusty Dusty: Great Northern’s Wenatchee-Oroville Branch. 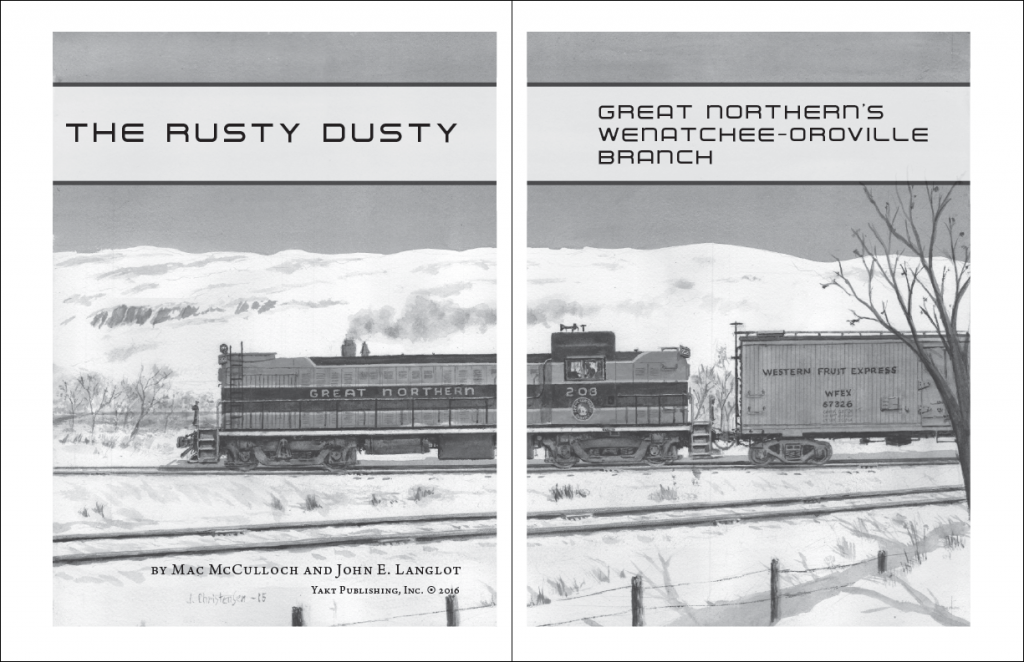 Title spread of The Rusty Dusty

The book looks beautiful! The publisher chose really nice white text stock so that the many images would reproduce well. The book is a hardcover, with charcoal cloth and bright orange endpapers, to coordinate with the colors from the painting on the dust jacket. Endpapers are one of those really small details that can effortlessly add a layer of dynamism to a book—it instantly makes it look more special. 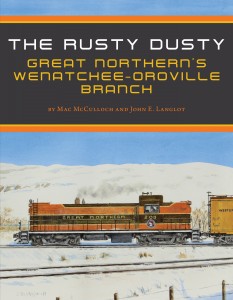 Dust jacket of The Rusty Dusty

Here is information about the cover image, which the publishers commissioned:

Alco RS-2 number 203 has just entered the W–O line at Olds Junction on a winter afternoon in the early 1960s. Head brakeman and co-author John Langlot has opened the switch and reboarded the engine. When the train is past the switch the rear brakeman will reline it for crossover movement and train No. 698 will be on its way to Oroville. Watercolor by retired NP/BN/BNSF locomotive engineer Jack Christensen.

I spent a lot of the year working on (and the work on them continues, now that we have moved on to the design stage) an 1,100-page, two-volume set of legal documents related to the Mountain Meadows massacre, as well as an 800-page volume of records created during the Utah War. Never fear, though—I’m also finishing up work on a tiny little manuscript about a prospector; its entire length was the size of two chapters in my usual behemoths!